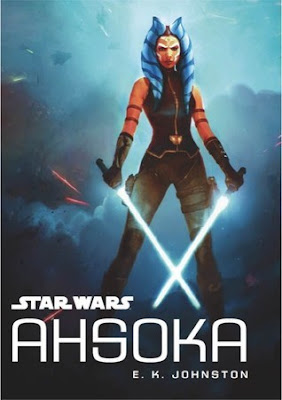 Fans have long wondered what happened to Ahsoka after she left the Jedi Order near the end of the Clone Wars and before she reappeared as the mysterious Rebel operative Fulcrum in Rebels. Finally her story will begin to be told.
Following her experiences with the Jedi and the devastation of Order 66, Ahsoka is unsure she can be part of a larger whole ever again. But her desire to fight the evils of the Empire and protect those who need it will lead her right to Bail Organa - and the Rebel Alliance.

Ahsoka is a well written YA novel that gives us some insight into the missing pieces of Ahsoka's life between the end of The Clone Wars series and her appearance on Rebels.


It begins about a year after the birth of the Empire. Ahsoka is learning to adjust to a new life and new situations without her fellow Jedi and Clone comrades. She is understandably cautious about making new friends, but then learns who she can trust. She is moving from place to place without a goal or mission, just laying low and making a living as a mechanic. This is the story where she finds a new mission.

The pacing is steady and the story has a bit of everything for the fans. Battles, Jedi meditation, friendships, strong characters, cameos from old favorites, and some flashbacks to fill in the gaps of Ahsoka's life. There was no romance, but I didn't miss one. I did have the sense that Kaeden had a crush on Ahsoka, but that's all. These characters have a lot a problems with the Empire at the moment and a romance would have clogged the story.

My one critique was the Lightsaber crystals lore when it came to the red sabers. It's not the explanation I like.

Ashley did a good good narrating her first audiobook. Sometimes I feel like the editing was a bit off, like her tone was different from sentence to sentence and I guess they were editing a few different takes together. Hearing the book in her voice was perfect though. No one else could ever narrate an Ahsoka story.

I never heard a Star Wars audiobook before, but I loved the addition of sound effects and John Williams' music.

I really hope there are more novels, or comic books, about Ahsoka's life between leaving the Jedi Order and being introduced on Rebels. There is so much to tell.