Book Review: Only With You by Lauren Layne (@_laurenlayne) 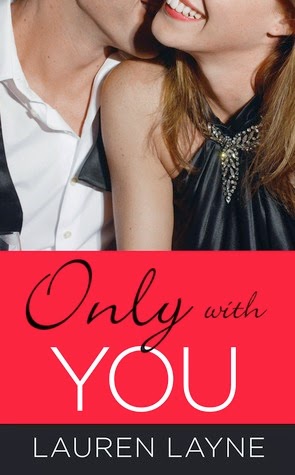 Only With You (The Best Mistake #1) by Lauren Layne
Publication Date: July 29, 2014
Published: Forever Yours
Source: eARC from Netgalley

Cocktail waitress Sophie Dalton doesn't exactly have a life plan. She's perfectly happy being everyone's favorite party girl. But when a Las Vegas bachelorette party goes awry and an uptight businessman mistakes Sophie for a prostitute . . . well, Sophie wonders if it's time to reevaluate her priorities. Swearing off her thigh-high boots for good, Sophie slinks back home with damaged pride-and a jackpot of a hangover.
Yet what happens in Vegas doesn't always stay there. On a trip to Seattle to open a new office, Grayson Wyatt meets his latest employee-who turns out to be the same woman he recently called a hooker. Wealthy and gorgeous, Gray is a man used to getting what he wants. And it doesn't take long to figure out that smart, sassy, sexy Sophie is everything he's been looking for. As their late nights at the office turn into hot morning-afters, they realize their Vegas misunderstanding may lead to the real thing . . .

It all started with a pair of boots, a broken elevator and bachelorette party. What happens in Vegas, stays in Vegas. Or at least that is what Sophie thought. This is a story of a chance meeting, a misunderstanding and what happens when you don’t exactly have your life planned out with every speed bump in your way.

I really enjoyed this read. Sophie was someone I could really connect with. Having dropped out of Law school and having no real clue what she wants to do next felt like every other 20 something year old I know including myself. She had a real good sense of humor and thick skin or so she thought.

Enter Grayson Wyatt. I mean, come on! A name like “Grayson” you have to anticipate some hotness. Haven’t you noticed the hottest most broodiest guys have unique names? I know. Gray felt like the most broodiest of them all. He was all business and no play and that just didn't sit with Sophie. Especially when he originally thought she was a hooker! See, there goes that misunderstanding.

Now when I read the blurb, I was expecting some major cheating thing going on because it mentions Sophie’s Sister. Thankfully it turned out to be nothing like I was expecting. But to be honest, that slight forbidden fruit aspect was alluring. It was still there because Sophie ends up working under Gray. See what I did there?

Speaking of under, Sophie finds her way under Gray’s skin in ways he doesn't know how to handle or understand and vice versa. The tension between the two of them was so palpable I could taste it off the page. There felt like there was a tug of war of the wills that went on between them. Most of the time it worked, others I just wanted to smack them both in the head.

Where Gray was all work and no play, Sophie was the yin to his yang but had this independence about her I appreciated. She didn't just roll over and play sex thing to Gray. She wanted to find the best place for her and not conform to what her family wanted. I think that there are a lot of stories where the female protagonist loses herself to the guy. Here, that did not happen and I liked it very much.

The only thing that I didn't really like was the insertion of Brynn and William’s story. I won’t give it all away but Brynn is Sophie’s sister and Will is Sophie’s best friend. They hate each other…or so we think. I felt like having snippets of their drama worked in some places, in others it felt forced.

Either way, it was fluffy with a little singe of deeper emotional turmoil. Cute and quick read. I will definitely be reading the next in this series.

(Sorry about all the John Krasinski....not really ;D )